What if? The Kuomintang's Plans for a Highway System in 1931 China 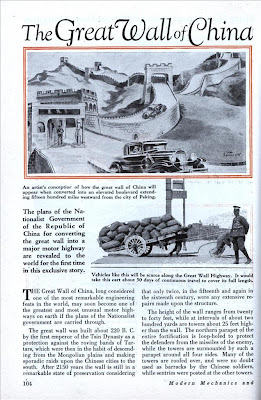 Interesting Article for the Day:

Another insane economic-social experiment thought up by Mao Zedong? Nope. Apparently in 1931, the Kuomintang government has its eyes on the Great Wall of China to become a national highway system .  I'm all for modernization, but seriously?  One could speculate how much of the central government's treasury funds would have been squandered on such a grand project before it was abandoned. Enough to limit the KMT's ability to wage war against the Communists? Probably not, but Chinese citizens and history buffs should be grateful that this project was never actually begun.

"...for besides its unquestioned military value, enabling the government to stamp out the incessant banditry in the interior provinces...."  -----Niiiiiice
Posted by Unknown at 9:33 PM