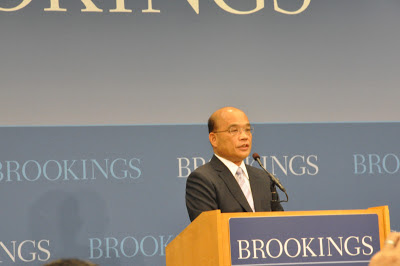 (Below are my observations from attending DPP Chairman Su Tseng-chang's speech today at The Brookings Institution in Washington DC)
It is only natural in the aftermath of political defeat for a political party to embark on a "soul-searching" mission,  and reflect on what might have been in a victorious scenario; as well as look towards the future and frame a message that will garner support among its electorate that will push it to a victory in the next round of elections.  Much in the same way that the Republican party looked inward following the defeat of its candidate in 2012, the Democratic Progressive Party (DPP) in Taiwan has spent the past year and a half searching for an effective platform that will ideally appeal to the electorate of Taiwan, as well as placate international concerns about its position on relations with the People's Republic of China (PRC).

The week long visit by DPP Chairman Su Tseng-chang to the United States has shown in myriad ways that the party is looking to not only learn from its past mistakes, but is striving to further evolve as a political party.    The speech given by Chairman Su at the Brookings Foundation on Thursday gave an insight into the DPP platform heading into Taiwan's "Seven in One" local elections in 2014, followed by the 2016 Presidential election.

Su began by stating that he sees the DPP evolving into "more than an opposition party", and listed a number of specific policy alternatives from what is currently being offered by the ruling majority  Kuomintang (KMT) party, including a proposed domestic stimulus package, reforms of Taiwan's troubled pension system, opposition to the recent media acquisition controversy, and halting the activation of a 90% completed nuclear power plant in Taiwan amid safety concerns about nuclear power on the earthquake-prone island.

Regarding the issue of cross-Strait relations, many analysts have pointed to President Ma's strategy of portraying the KMT as the party of stability in respect to its interactions with the PRC since Ma won the Presidency in 2008.  Additionally, many have concluded that 2012 DPP Presidential candidate Tsai  was viewed with suspicion by many government officials in Washington as being someone who would not continue the cross-Strait policies of Ma if elected (although sources who were present at these meetings between Tsai and US officials stated that the officials viewed her with suspicion from the outset of the meetings, and  was not given a fair opportunity to explain her positions regarding Taiwan-China relations with  such officials).

Chairman Su believed that "after five years of improved ties between Taiwan and China, the pace of agreements between the two will decelerate and soon stall."  Because of this, Su stated his desire to see Taiwan "regain the confidence of its international friends" and looked for Taiwan to actively pursue trade ties in order to better integrate Taiwan into the international economic system.  He also pointed out that with the recent opening of the DDP's China Affairs Council (CAC) on May 9th, the DPP is willing to engage Beijing in order to improve relations.  However, Su did state that he felt the "political and military" differences between the two countries were too wide at the moment to actively engage in negotiations regarding these two issues.  Su also stated that Taiwan was "already a sovereign country with an official title that is the ROC", and that there was no need to change the status quo at this time. 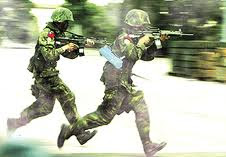 In the realm of Taiwan's national defense, Su accurately stated that "..democracy and security does not fall from heaven," and that "it is time to demonstrate that we are serious about our national defense," noting that while President Ma's 2008 campaign promise to have defense spending at 3.0% of GDP has never been reached, that under the prior administration defense spending was 2.7% of the annual budget in 2007, and reached 3.0% in 2008.  Su also stated that while Taiwan could not expect to win a war against China, Taiwan could "at least demonstrate determination" and make China "pay a huge price" if it chose to initiate military action towards Taiwan.  This author also agrees with Su's statements that national security should not be politicized, and decisions made  with the nation's security in mind be the paramount deciding factor.

In conclusion, Su appeared to come to Washington with a clear agenda of talking points that were directed for both domestic and international consumption.  Phrases such as "rebalancing relations with the US", closing "gaps of perception" between the DPP and the United States, and DPP's "soul searching" were repeated often by the Chairman.  Su also looked to placate fears that mistakes made in the previous DPP Presidential administration (under President Chen shui-bian) would not be repeated, in regards to political "surprises" that many felt hindered the Taiwan-US relationship during Chen's tenure as President.  Perhaps the most revealing statement made by Su was that in attempting to become a "more responsible DPP", the party should make decisions that are not always popular with the electorate, but are good for the country.  While it remains to be seen if the DPP will adhere to this bold decision making rationale, it appears that a more mature Democratic Progressive Party is attempting to evolve, and in doing so will give the people of Taiwan a clear choice in choosing their elected leaders, instead of merely having a system in which the DPP plays the role of simple opposition and lacks alternative policies of its own.  In the end, Taiwan's democracy continues to evolve, which bodes well for not only Taiwan, but for the prospects of stability in the region as well. 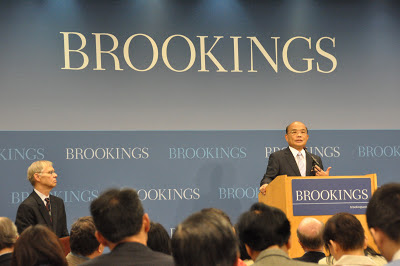